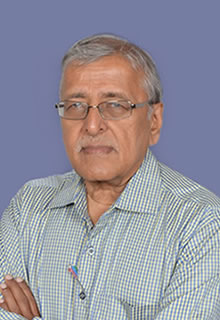 5) Bonded Film Lubrication : Development of Bonded Film Dry Lubrication process for lubricating the rubbing surfaces of deployment mechanisms that are exposed to the harsh space environment. Development of test procedure and elaborate test facilities and exclusive lab for the testing and certification of such lubricated components for flight use. Transfer of this process to industry for catering to the large scale requirement of ISRO. Testing and qualification support for the development of indigenous lubricant.

6) Thin Film Lubrication : Development and qualification of Thin Film lubrication by sputter deposition of molybdenum-di-sulphide. This technology is primarily adopted for lubricating ball bearings that are subjected to large number of cycles unlike the deployment mechanisms. Development of coating and testing procedures for ball bearings, friction test facilities for evaluating friction and wear in vacuum/ambient. Facilities for evaluating the long life of the coated bearings under high vacuum.

7) Magnetic Torquers : Design, Development and Qualification of various sizes / types of Magnetic Torquers for all the satellites since Apple which was launched in 1981. Streamlining of fabrication process, test procedures and design steps for both elecromagnetic as well as mechanical to improve the work output and reliability. Establishment of all the required facilities for fabrication, assembly and testing.

8) Export of Magnetic Torquers : Fulfilled the export order of custom built magnetic torquers through Antrix of ISRO. This called for detailed documentation regarding design, process and testing apart from development of special processes, tests and test procedures as required by the end user. As project manager of the programmme realised engineering and qualification models and delivered 20 and 3 Flight units of magnetic torquers to Hughes Space and Communication, USA and Matra Marconi Space, France respectively.

9) Electric propulsion : Mechanical support for the development and charecterisation of 10 mN Gridded Ion thruster using mercury as a propellant and establishment of test facilities. Fabrication and testing of indigenous hollow cathodes required for the thruster. Development and qualification of 350 W / 15 mN Hall Effect Thruster (HET) which was flown in Gsat-4 satellite. Development and testing of 1400 W / 80 mN HET intended for high power communication satellites. Establishment of large vacuum test facility with provision for thrust and exhaust plume measurements.

10) Magnetic Bearing - Reaction Wheel : Development of magnetic suspension with passive radial bearings and active axial bearing as a substitute for conventional ball bearings to improve the friction and life in the case of reaction and momentum wheels. Design, fabrication and testing of a qualification model of 15 Nms reaction wheel. Establishment of required infrastructure and test facilities for the above activity. The wheel assembly also consists of indigenous brushless DC motor and electronics for eddy current probes, suspension control as well as motor commutation.

11) Brushless DC Motor : Development of brushless DC motor for driving the dual gimbal assembly to keep the antenna pointed to the ground stationn during transmmission of high bit rate data. The motor was developed and qualified as an import substitute using similar procedure and technology adopted for the motor of the reaction wheel.

13) SROSS - AOCS : As project manager of SROSS series of satellites taken care of the AOCS design consisting of actuators like thrusters, momentum wheel, magnetic torquers and sensors namely magneto meters, sun sensor and earth sensor for for both spin and 3-axis stabilised missions of the series. This called for overseeing the configuration, control logic, simulation and implementation aspects. The mission related issues were also taken care of.

14) Mechanical Packages : During the last ten years the mechanical packages required for the AOCE were provided by our Division. Three different types of main packages were catered to as per the AOCE hardware style and altogether about 70 package sets have been delivered. In addition, number of auxiliary and add-on packages were also qualified and supplied for various missions. This calls for fabrication of standard modules, inspection, customisation for the project, thermal treatment, etc..

16) Depatmental Promotion Committees : Taken part since long as a Member and Chairman in many departmental and inter centre committees for all grades of Technicians, Draughtsmen, Senior Technicians, Technical Assistants and Engineers SB, SC & SD; Expert member for the promotion to Engineer-SE & SF; Centralised recruitment of Engineer-SC;,